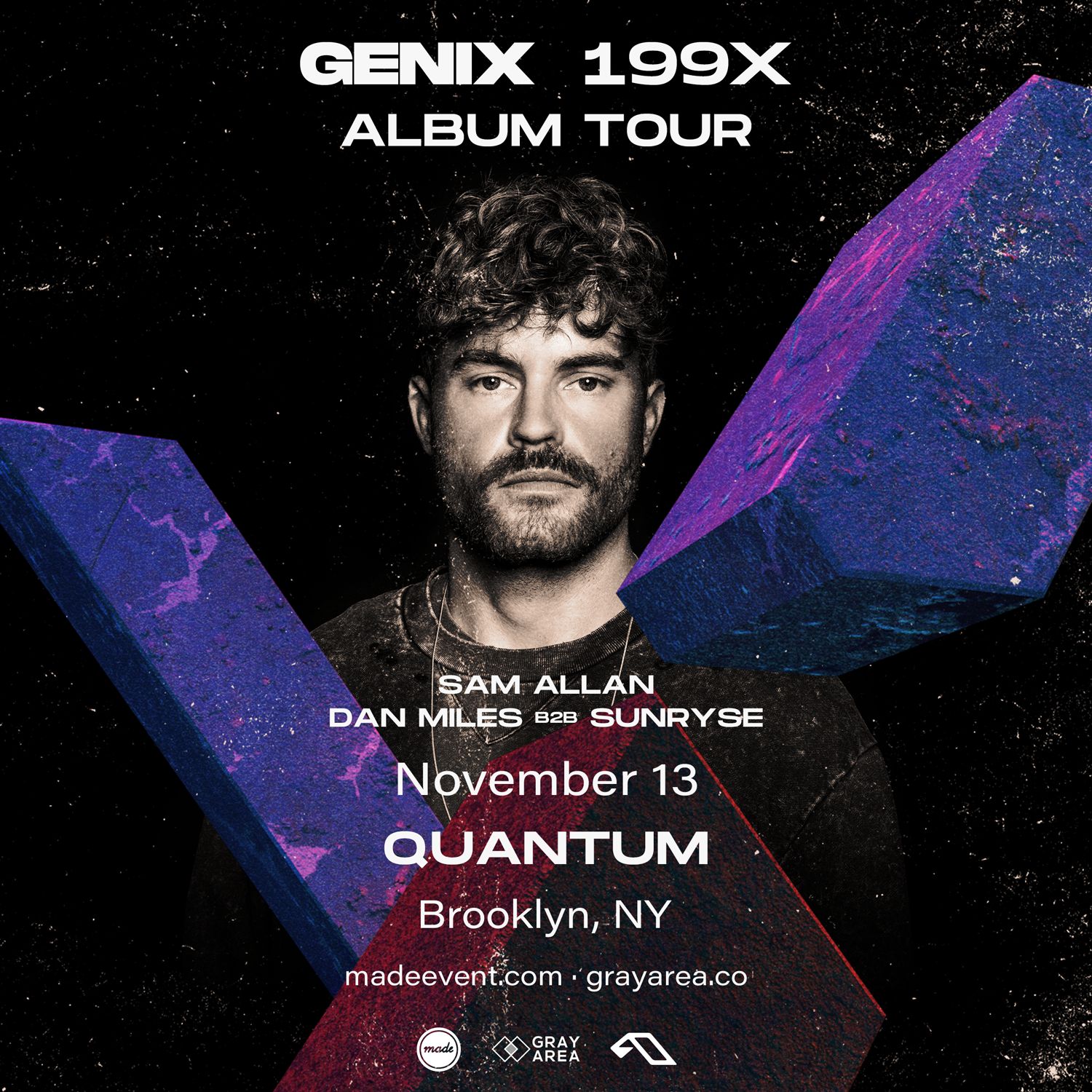 One of the longest-serving linchpins of the trance scene, Genix has deep roots in the genre that have helped his production career to grow exponentially since his debut release in 2003. Since then he has become a mainstay of Anjunabeats, with other releases on Armind, Vandit Records, Enhanced Records and Reset Records to name a few. DJing alongside the world’s elite along the way, he has become a huge name in his own right.

Pushing an exciting new sound that makes a departure from many of his previous works, he is one of the most exciting acts in Anjunabeats’ impressive stable. With no compromise in his style across his 100+ released singles and remixes and no desire to water down his sound in order to reach more commercial audiences, he is an artist who is truly dedicated to his scene.

His new formidable sound blends the most exciting elements of trance, techno, house and progressive into a potent, high octane cocktail. With a penchant for in-your-face textures and sounds set against stunning melody and beautiful atmospherics, his sound is at the vanguard of the trance movement. Blending reverence for the formative sounds of 1990s dance music upbringing with the sounds of now, his tracks are consistently among the most exciting in the scene.

He first found fame as a resident and promoter at legendary UK club night Passion, which was one of the epicentres of the ‘90s/2000s trance explosion. Cutting his name alongside the scene’s biggest DJs, he amassed a wealth of knowledge and experience that would give him solid foundations for the rest of his career. By the time he turned his hand to production in the early 2000s, he had a keen understanding of what worked on a dancefloor, giving him a huge head-start. It quickly became clear that he was as talented in the studio as behind the decks, and it wasn’t long before he was attracting major attention. His massive remix of Peter Gelderblom’s ‘Waiting 4’ version Red Hot Chilli Peppers’ ‘Standing On The Shore’ was a huge hit on BBC Radio 1, and over the years he has remixed many of the trance scene’s finest, including Above & Beyond, Markus Schulz and Sander Van Doorn.

Following years of building his name via releases on cult trance labels, he began a long and successful relationship with scene leaders Anjunabeats in 2013. Over 20 originals and remixes later with Above & Beyond’s acclaimed label and he continues to be one of their most important artists, with some major plans in the works to elevate him to higher reaches still. His DJing has taken him across the UK, Europe, Asia, Middle East and Ibiza in recent times, and at one point he held the Guinness World Record for the longest DJ set in history, clocking in at 84 hours. He also recently broke the world record for playing a DJ set at the highest recorded altitude, playing at Mount Everest Base Camp at 5,600 metres above sea level.

A major compilation and world tour are in the works, with some incredible new tracks waiting in the wings ranging from pummelling, dirty techno workouts to euphoric, rave-inspired gems.

New York native Sam Allan growing up on bumping rock, rap and pop in his headphones on a random adventure into the City, he discovered the infamous venue “Twilo.” They guest starred international DJ’s every Friday night and he kept coming back every Friday night. Addicted to the spinning and scratching of the discs, the bass of the speakers, and the crowd going wild, needless to say, he had fallen in love. Sam Allan has been a beloved DJ on the New York City club circuit for several years. He has performed regularly at many of the New York cities hottest venues, such as Somewhere Nowhere, Marquee, Schimanski, LAVO and Brooklyn Mirage Avant Gardner. In addition to his frequent performances and DJ sets, Allan has also spent each year since 2015 honing his production chops and developing his own distinct sound – a highly original blend of house, techno, progressive and trance. In 2019 Sam landed supporting gigs for some of the finest names in the industry, including the ball drop for Kaskade’s NYE show at Marquee (for a third consecutive year), and opening sets for Eric Prydz on three stops of his most recent HOLO tour. 2021 looks just as promising with. In the studio, this year has seen another releases on notable labels such Thomas Golds Fanfare records, DJ Chuckie Dirty Dutch, Blackhole Recordings sub label and more expected. Sam Allan has been gaining traction on Spotify with his hit “Find a better way” with Nino Lucarelli and has helped spur a strong surge on Spotify.

Dan Miles is, aside from a prolific producer and highly skilled DJ, the visual director behind the Columbus, OH-based party Headcleaner and a total blast at a party near you.
Alternating between a shadowy figure looming in the back of the DJ booth and a loud and colorful character on the decks, Dan Miles is the product of over a decade making and playing music, finally coming up in Columbus, OH, off of the success of the Headcleaner party he directs, designs and DJs for. His lifelong taste for hiphop, r&b and jazz, informs a vivacious style in his work, reflecting energy pulled from genres which have continually been ahead of their own curves. Expect open-genre DJs sets ranging from deep and sinister to bright and emotional, nevertheless maintaining effortless flow and the all-important funk at all times.
Credit: Resident Advisor