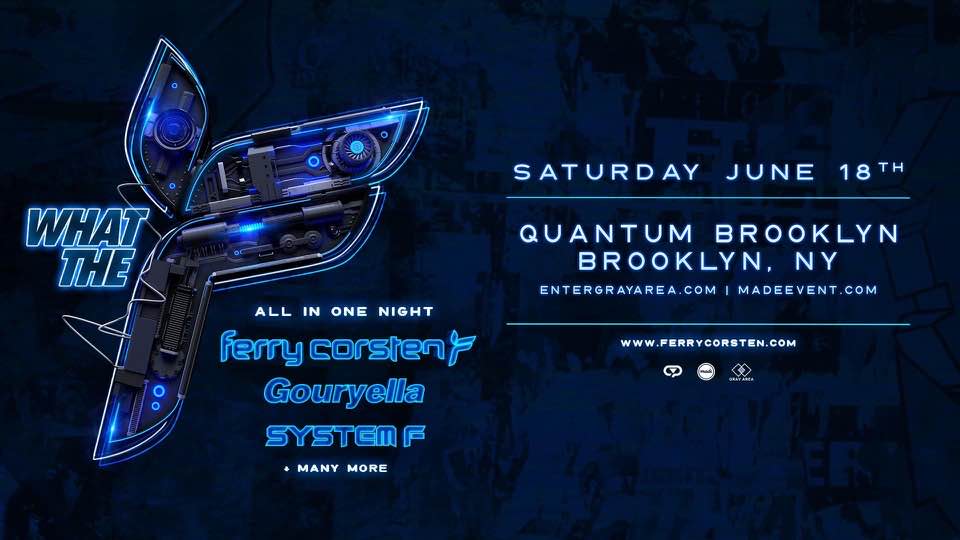 Hailing from Rotterdam, the Netherlands, Ferry Corsten’s lustrous career is exemplified by a passion for music that began as a hobby and spiralled into a full-blown profession. Today, as it was in the beginning, Corsten’s skills lie in his ability to coax the maximum emotional impact from electronic dance music of all genres, not just trance, but also progressive-house and electro. He remains and has always been ahead-of-his time, making music that becomes a template for others to follow.

It was the album, Out Of The Blue, that started it all. As Corsten’s sophomoric artist album under the alias, System F, the eponymous single became a worldwide hit and charted in the UK’s Top 20 UK singles charts and Japan’s Top 10 singles charts for three consecutive years after its release. Corsten’s rapid success ignited a steady flow of releases including ‘Gouryella’ with Tiësto. It was during this time that Corsten’s remix of William Orbit’s ‘Barber’s Adagio For Strings’ became a clubland anthem. Though the instantly recognizable original appeared in the film Platoon (directed by Oliver Stone), it was Corsten’s heady remix that took the original composition’s strongest elements and amplified them into a singular, explosive masterpiece. Offers for remix work have poured in furiously ever since, including remixes for U2, Moby, Faithless, The Killers, William Orbit, Duran Duran, Public Enemy, Nelly Furtado, and many others including TV’s winner of the ‘X-Factor,’ Melanie Amaro.

Corsten has also won his share of industry awards, and consistently appeared near the top of DJ polls worldwide, including his #53 placement in DJ Mag’s Top 100 DJs for 2020, where he rose 6 places and extended his ranking as the longest serving Dutch DJ in the Poll at 9 years, capping what was an impressive year musically. Ferry Corsten has released a steady flow of new music, and has eight full-length studio albums under his belt, namely: ‘Looking Forward’ as Ferry; ‘Out Of The Blue’ and ‘Together’ as System F; and ‘Right Of Way’, ‘L.E.F.’, ‘Twice In A Blue Moon’, ‘WKND’ and most recently ‘Blueprint’ as Ferry Corsten. These eight killer albums have yielded more than their share of Gold records, including ‘Punk,’ ‘Out Of The Blue’ and ‘Rock Your Body Rock’. 2016 acclaimed ‘Hello World’ EPs solidified him as an ever-relevant presence in trance music, demonstrating his consistent ability to stay ahead of the curve. ‘Hearts Beating Faster’ ft. Ethan Thompson became one of most revered tracks from the EP, charting high in radio playlists worldwide, finding extended support across the scene’s biggest spinners and to date receiving in excess of 3 million streams on Spotify. That year saw Ferry nominated for an International Dance Music Awards (IDMA) as fans put their support behind him being named ‘Best Trance artist’ – once again proving the longevity of his talents, something highlighted by further nominations in 2018, such as ‘Best Trance DJ’ at the DJ Awards. In 2019 Ferry was presented with the prestigious ‘Legacy Award’ at the 33rd annual International Dance Music Awards (IDMA’s) during Miami Music Week.

2018 saw Ferry launch his new project UNITY, a concept in which he will collaborate with iconic trance acts with the vision of uniting the trance community for a bigger cause. Ferry partnered with VH1’s Save The Music Foundation for this, an organization formed with the intention of reinstating music programs in schools which to date has helped over 2,100 schools. These high-profile UNITY collaborations include works with Paul Oakenfold, Ilan Bluestone, Gabriel & Dresden, Sander van Doorn under his Purple Haze alias, with Ciaran McAuley on ‘Mo Chara’, and the breakbeat-influenced ‘Black Lion’ alongside EJECA’s Trance Wax alias. Ferry’s latest UNITY outing saw him reach out to fans during their extended stay at home, requesting their creative input on a melody that resulted in him collaborating with over 20 artists across the world on ‘Free’.

Early in 2020, Ferry Corsten released his ambient album, ‘As Above So Below’ under his FERR By Ferry Corsten alias, a personal project which allowed him to further explore his love for orchestral music that evolved from his long-running Stillpoint playlist. Ferry’s love for cinematic sounds has long been present in his music, as the iconic Rotterdam native signed off on his 5th artist album as Ferry Corsten – Blueprint – in May 2017, this interstellar storyline-driven epic is something unlike any Ferry Corsten record before it. A conceptual masterpiece the album sees Ferry taking his music into an entirely new world combining his love of storytelling, his passion for science fiction and his lifelong bond with music. The album itself featured an encapsulating storyboard drafted up by House Of Cards screenwriter David H Miller and Ferry himself, as well as featuring narration from Hollywood actor Campbell Scott, of Amazing Spider-Man and Exorcism of Emily Rose fame. ‘Blueprint’ received rave reviews, with Mixmag hailing it as their ‘album of the month’, as well as being acclaimed by the likes of DJ Mag, who made Ferry their front cover feature, and Rolling Stones India. The album was also earmarked by Dancing Astronaut as an “innovative, gripping and a true game changer” release, whilst Huffington Post said the record “Redefines the Electronic Concept Album”. ‘Blueprint’ also earned Ferry his first Top 10 in the Billboard Dance/Electronic Album chart, landing at #7. Late 2018 saw Ferry complete his first film score, for the mystery thriller ‘Don’t Go’, directed by David Gleeson and featuring Blade actor Stephen Dorff and Grey’s Anatomy’s Melissa George, and the soundtrack was released in January 2019.

2017 Ferry embarked on his Blueprint album tour, taking his live sci-fi conceptual project all over the world, including Asia at Zouk, Kuala Lumpur – DJMag’s current #4 best club in the world, as well as a national homecoming gig at Beach Club Fuel in Overveen, Holland. All this whilst maintaining regular shows on the party island of Ibiza at Cream, Amnesia, where in 2017 Ferry played the closing party alongside fellow trance pioneer Paul Van Dyk. Ferry used the extra time last year to delve deeper into his inspirations and continued to push the boundaries of his sound, highlighted by the launch of his new weekly Resonation Radio show live from Armada’s studios, taking the place of the long-running Corsten’s Countdown and giving Ferry the chance to explore his wide palette of tastes across the electronic spectrum. This exploration also resulted in Ferry’s team up with We Are Loud on the melodic techno anthem ‘I Don’t Need You’, and he also enlisted techno’s man-of-the-moment Alan Fitzpatrick to remix his iconic ‘Gouryella’ single.

From the outset, Corsten has been a prolific music-maker under numerous different aliases. Those pseudonyms included System F, Moonman and perhaps his most notable one Gouryella (with Tiësto). The latter made a brief cameo appearance with a long-awaited single in ‘Anahera’ – that went on to be one of the standout tracks of 2015 and topped Beatport’s trance chart at the year’s end; even earning a nomination for ‘Best trance track’ in the 2016 edition of the IDMA’s. Drawn in by the love and passion of the fans upon ‘Anahara’’s release, Ferry stepped into 2016 with an idea to breathe life into the well-known sleeping giant. Back in Autumn 2016 ‘Ferry Corsten presents Gouryella’ became a reality, with a stunning full stage production across festivals and big arenas worldwide. Launching the live show at the Allphones Arena in Sydney Australia, to a rapturous fan response, this eagerly awaited tour took in appearances at events such as Balaton Sound Festival, Beyond Wonderland, EDC UK, EDC NYC, Ultra Europe and Belgium’s iconic Tomorrowland festival. The live show was bookended by the release of a 12 track limited edition Gouryella Box set for the music collector and a documentary on the big screen, ‘Gouryella – From The Heavens’ was unveiled as the official movie that details the full story of one of dance music’s most revered and mystical dance acts. Moving towards the end of 2017 and into 2018, Corsten reignited the Gouryella project with his brand new Gouryella 2.0 show, building on the original production to include new music, and a better stage experience than ever before, which included Gouryella featuring in a track on Ferry’s ‘Blueprint’ album – ‘Venera (Vee’s Theme)’. Ferry remains committed to striving to explore different avenues through his music, alongside standout shows at the likes of Tomorrowland, UNTOLD Festival and Airbeat one, and after debuting his System F live show at Dreamstate SoCal in December 2018 to mark 20 years of ‘Out of The Blue’, Ferry has taken the concept worldwide, with performances at the likes of Electronic Family and Transmission. After a year of largely no touring, Ferry kept fans who haven’t been able to see him perform live this year up to date with his latest picks via his CHRONOS series of livestreams. Spanning 3 shows. CHRONOS gave fans an insight into Ferry’s favourites, covering old, current and new music, and culminating in a never-before-seen NYE Gouryella show that saw him premiere a brand new Gouryella single.

Alongside hit global exploits as a DJ, chart scaling achievements in the studio, Ferry continues to have a day-to-day involvement in his Flashover Recordings imprint as every facet of his projects continue to evolve, highlighted by the labels partnership with Armada Music. Launched back in 2005, Flashover enables him to scour the world for fresh talent and release music by cutting-edge producers, giving them a voice on the world stage, alongside hosting his own label parties everywhere from Amsterdam Dance Event to Miami Music Week.

Striving always for excellence, this is an artist who is never satisfied with all that he’s accomplished, instead always pushing for the next exciting idea. For Ferry Corsten, the possibilities are boundless.