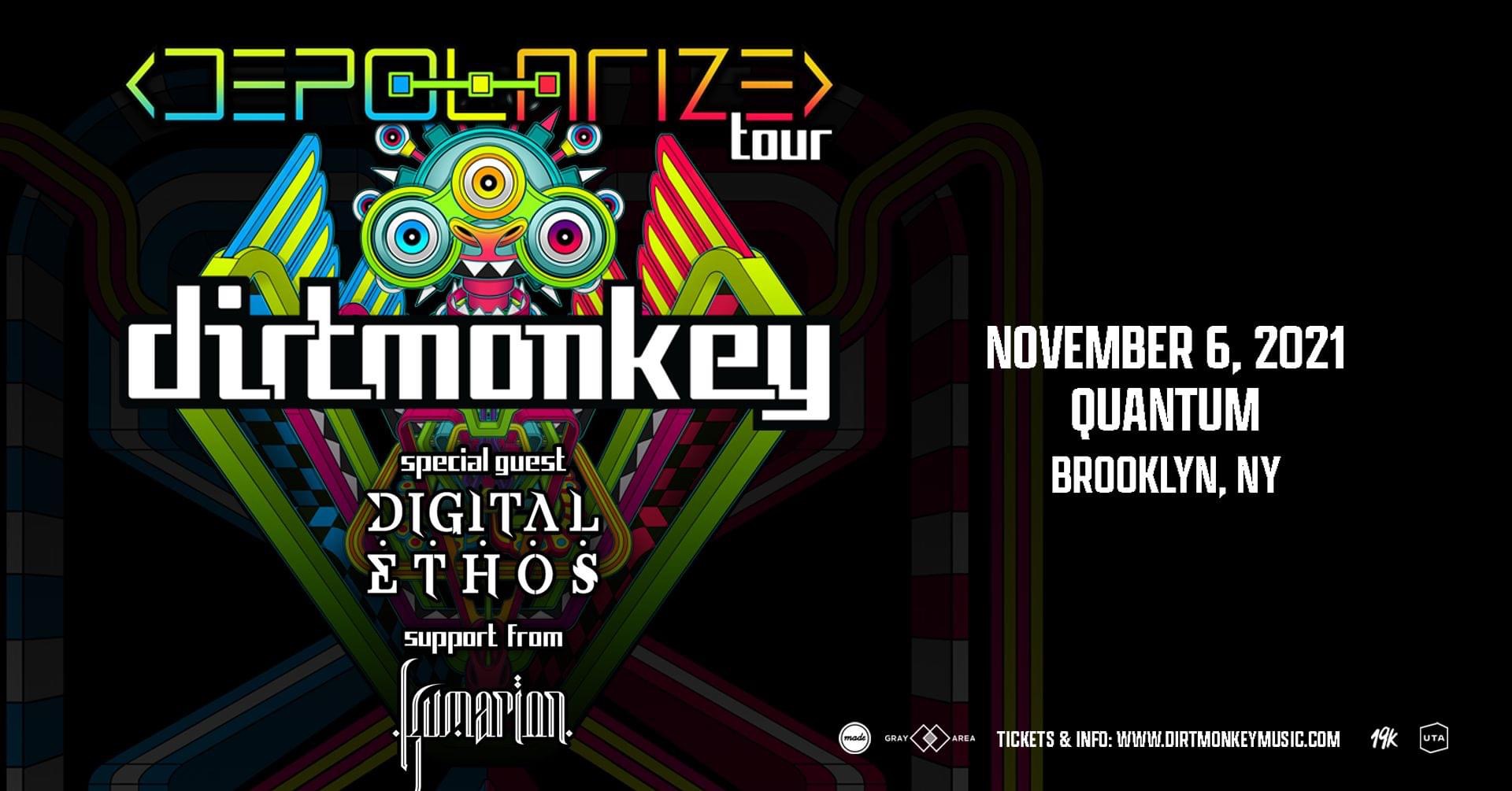 DIRT MONKEY— aka Patrick Megeath, is smashing 2018. With over a dozen recent high-profile releases, and a stacked tour schedule already in full effect, a new era has begun, and more new tunes are on the way.

Over the past several years, Dirt Monkey has carved his uplifting, bouncy, and unique sounds into the Denver dubstep community, and onto the national touring scene. He finished last year with a strong release schedule: “Wubula” (SubCarbon), “Beef” w/ Bookie T (SubCarbon), “The Disciple Roundtable EP” (Disciple), and multiple releases on Wakaan. He took this brisk pace into to a fall tour with Bear Grillz and a Ganja White Night tour at the beginning of this year that sold out nearly every date.

He has worked and collaborated with a wide-variety of artists such as: Ganja White Night, DMVU, Illenium, Party Wave, Run DMT w Barrington Levy, AMP Live, and Jantsen. Dirt Monkey has performed at a countless number of breathtaking venues, including Red Rocks Amphitheatre, clubs in France, and Beta Nightclub in Denver, CO (where he has held a residency for the last 5 years). Also, for the past four years, he established and ran the record label, Kairos Audio, before handing it off to label partner and co-founder, Jantsen Robertson.

Fresh off a sold out co-headline tour with Subtronics, he used that momentum to go full steam into a headlining set at Shambhala. The wubs-master also made stops at EDC Las Vegas, Global Dance Festival, Nocturnal Wonderland, and Lost Lands and he’ currently in the middle of a 40+ date fall tour in support of his most recent release on Rise of the Octopeel.

Dirt Monkey has always strived to fuse the wonky, high-energy sounds of old school dubstep, and the crisp sounds of IDM. Now, he’s succeeding in bringing that sound to a global audience.

The ‘Digital Ethos Project’ derives from the collection of ideas and inspiration gathered from all genres of music, creating a new take on what we consider weird, experimental, and heavy.

Digital Ethos aka Charlie Quigley is a South Jersey based electronic music producer. Emerging only recently in the Bass Music scene, he has already gotten support from the likes of Bassnectar, Liquid Stranger, Rezz, and Space Jesus, to name a few. His most notable accomplishment, a bass ripping dubstep collaboration with the legendary Bassnectar. Featured on the popular ‘Reflective’ EP Series, the track titled ‘Slather’ has been skyrocketing the charts, and a fan favorite among the basshead community.

Charlie has also been hand picked to support Space Jesus on a major U.S. Tour, which was his first touring appearance. Post tour, He has associated with the popular label, ‘Wakaan’ and is expected to be releasing music with them in the near future.

Kumarion continues to impress with fierce, dynamic range, as heard in the producer’s latest original release on Jadū Dala, “Bad.”

The song packs heat with gritty synths and low end aggression, leaning into Kumarion’s knack for cutting-edge sound design. In carving out spaces for every sound and detail to live, he achieves a clean, experimental tone with a steady, headbanging type flow.

Kumarion exploded onto the scene in 2020 with his insanely catchy bass anthem “Want It,” setting the bar high for what’s to come. The project is centered around bass-centric productions with an underlying passion to bring drum & bass to the forefront.

As one of our Artists to Watch for 2021, we can’t speak highly enough about the talent heard here. Kumarion has proven in a short time he’s one to watch and here to stay.

Listen to “Bad” and link up with Kumarion below!